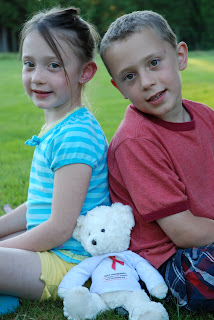 The much awaited and anticipated arrival of NAITalie has finally come to an end. On August 16, the kids received that little white slip that told them that there was a package awaiting their pick up at the local Post office. They were so excited that they came to see me at work so that I could watch them open the box that contained their little treasure that gets to visit with them for a week or so.  I will admit that there have been disagreements over who’s turn it is to sleep with the bear, or snuggle the bear, or show their friend the bear but NAITalie has received nothing but love since her arrival.
On August 19, Colton and Payten-Raye were interviewed by Sylver McLaren from the Maple Ridge Times about the visit from NAITalie and the condition that they were born with. I feel that the interview went well and Sylver seemed genuinely interested in learning more about Neonatal Alloimmune Thrombocytopenia. As soon as the article comes out, I will post a link so that everyone can read it. I hope that this is a step in the right direction for raising NAIT awareness.