It all started in June 2014 when we found out I was pregnant with my first after being so sick I couldn’t keep anything down. A week after I was admitted to hospital with ketones and severe dehydration and diagnosed with hyperemesis and put on anti sickness medication and a drip. All the way through my pregnancy I suffered with severe sickness and had to take anti sickness just to be able to eat and drink. 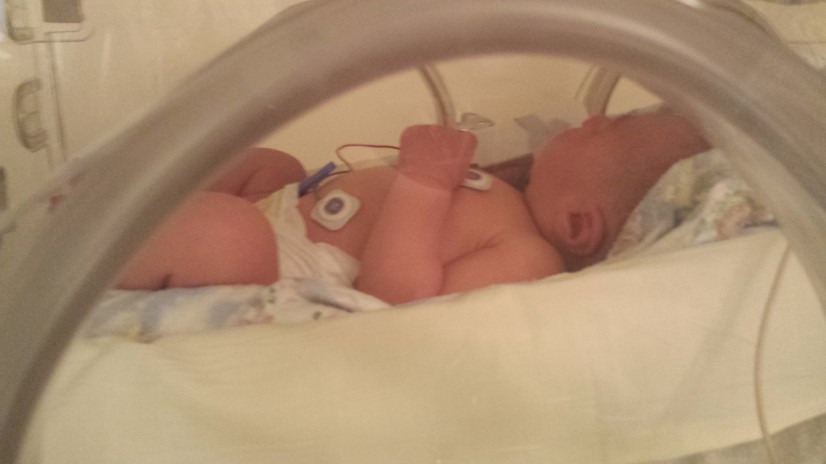 After a long 9 months (and a week late) my little girl Winter Jane Wallace decided to make an appearance. After 24 hours in labour, only gas and air and a traumatic delivery I was so happy to meet my little lady and to be over the labour and sickness. At first she wasn’t breathing to well so a crash team was rushed down to us and after a while they said she was fine. She was very quiet though and never cried. The next day the peadiatrician came to discharge us so we could go home, but when checking her over they noticed a pin prick rash all over her. They didn’t seem too concerned and took bloods and told us we would have to stay until the results were back. Thinking not to much of it we went back up to the ward.

The next morning at 2am a handful of doctors rushed into my room where they informed me Winter had to be rushed to neonatal high dependency. I went down with them, clueless to what was going on. In the ICU they hooked her up to loads of tubes and wires and put her in an incubator. They didn’t really tell me what was going on only to not worry and they would tell me more when they knew more. Ive never felt so alone or petrified in my life. They then did a scan on her brain and told me it looked like she may have had a bleed on her brain but weren’t 100% sure as its common to have some bruising after a traumatic labour. I just stood crying while they did all the scans and tests. They took soo much blood from her and started her on antibiotics through a cannula in case it was sepsis. I kept asking if she was going to be OK but no one would answer me.

After what seemed like forever they informed me Winter had low platelets (11,000) and she would need a platelet transfusion. They would need to rush the transfusion from another city as they didn’t have what was needed there. A few hours later they started the transfusion and her platelets went up to 149,000. After a day they had dropped to 63,000 so told us she may need another one. Thankfully she didn’t, and they hovered around that number for a few days.
She was diagnosed with NAIT and we were told we wouldn’t know the cause for a while as they needed to test mine and dads bloods which could take a week for the results. Also the tests for sepsis could take at least 3 days so she continued on antibiotics until they were back. It was so hard and heart wrenching not knowing what was going on and what the outcome would be. Holding your baby with tubes coming out them is the worst thing, you just feel helpless. After 3 days they said it wasn’t sepsis and they were quite sure it was caused by the antibodies I produced while pregnant. I couldn’t and still can’t believe my body did this to my baby. Within days, and with daily blood tests, they said her platelets were slowly going up. After a week our results were back and they said it was the HPA-1a antibody I produced that had caused it and we could go home as long as I went back every couple of days for tests. When we left her results were 84,000 and today after 5 weeks they are 143,000 so they will be in the normal range soon.They also told us the bleed on the brain is nothing to worry about and she is in the clear. I’m sooo happy shes well and feel she’s our little miracle. Its been a very tough road and its devastating to know all my children would have this problem which makes me not want any more as I don’t want to go through all that again but hopefully sharing our story will make people realise that they are not alone even if this a rare disease.
Nikki Hegarty