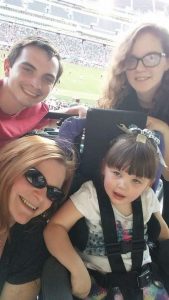 My NAIT story began after my daughter Jaylyn was born. It was a difficult pregnancy and I knew something was wrong. The Drs and specialists disagreed and grasped at straws, misdiagnosed and dismissed the red flags until after my daughter was born covered in petechiae, bruises, and a platelet count of 13k.

Thankfully the hospital she was born in was staffed with a neonatologist that suspected she had NAIT. IVIG and platelet transfusions were ordered and had to be transported from a blood bank so by the time they arrived, her platelets had dropped to 7k.

The prognosis was grim and the unsubstantiated fears I had my entire pregnancy were confirmed. An ultrasound was done to rule out a brain bleed. Nothing was found. If I only knew then what I know now, I could have better advocated for my daughter. She was then transported to a specialty children’s hospital with a NICU as she was not improving. Over the course of our stay there were of course concerns and red flags for other problems, but the focus was on her platelets, which were slowly increasing. After a week in the NICU, her platelet levels were high enough that we could go home and I was told the worst was over and she would be fine. By 2 weeks old I knew in my heart they couldn’t be more wrong.

It took months, 8 to be exact to convince a Dr to order a brain MRI. Months of being dismissed as a nervous mom (a nervous mom with 20+ years of special needs pediatric nursing under her belt, mind you). I knew at the very least she had cerebral palsy. The MRI results were devastating and very telling of what the brain ultrasound had missed when she was born. Not only was there a brain bleed, there was also right ventriculomegaly, dysmorphic hippocampi, bilateral perisylvian polymicrogyria, and schizencephaly. This is just the abridged version of the findings of her MRI. It was only after the results were received that I was given a less than optimistic outlook for her future. I was told they were surprised she isn’t a vegetable. That she would never walk or talk. The same baby I was told would be just fine now had a grim prognosis.

Despite the delay in diagnoses and delay in getting her proper treatment, my persistence and her perseverance paid off. She is not without her struggles but she is doing so much more than the low expectations that were placed upon her. She is in fact walking. She communicates via sign language, word approximations, and an iPad. She has a passion for football (Go Eagles!) and is taking Polynesian dance lessons. Jaylyn was an unexpected blessing who has 2 amazing older siblings, a brother Devon and a sister Samaura who has the expertise to rival any nurse’s skills. My hope is that by sharing my story it can help others to advocate for their children and realize that although a diagnosis can be scary, these kids are incredible and so much more than a diagnosis.