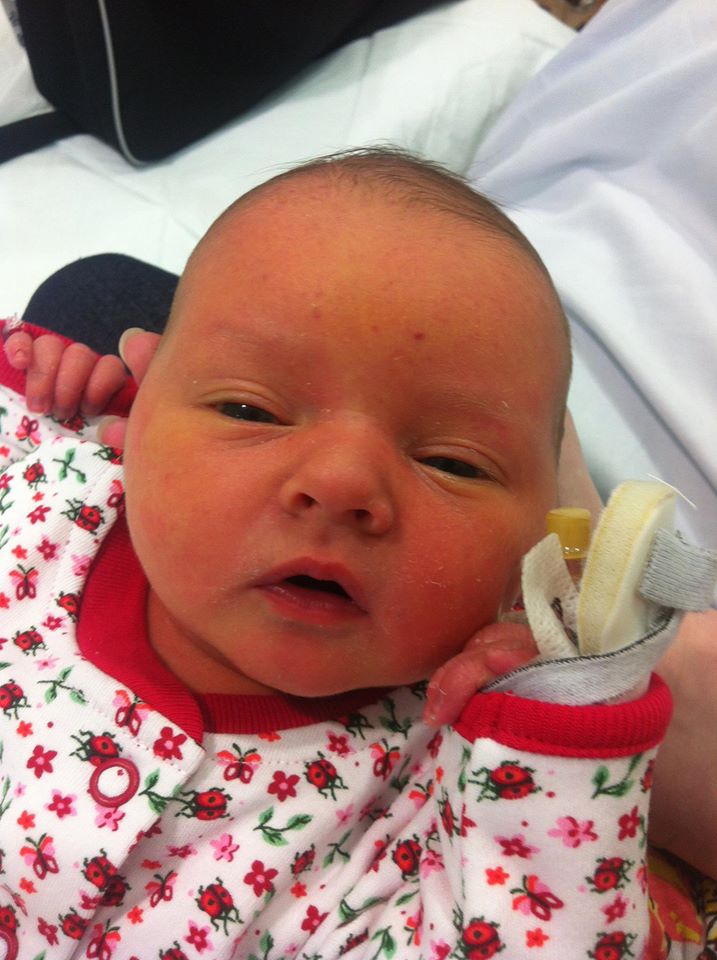 It all started the day my daughter Emilia was born, clearly it was the best day of my life, and my tiny human had finally arrived after days of labour (I’ll spare the details). It was late at night when she arrived and after my midwife getting her dressed for me, I was taken to the ward with all the other new mummies. It wasn’t until early the next morning when we were getting ready for when our visitors arrived, I noticed that Emilia had what looked to be a tiny pin pricked sized rash all over her body. Alarm bells started ringing. Was I being silly? Was there something wrong? I called the midwife who in turn called the doctor. Who then proceeded to take Emilia away for some blood tests.

After what seemed like a lifetime. The midwife came in to talk to me. Emilia wouldn’t be coming back up to the ward with me she had to stay down in the SCBU. My heart sank I was terrified, what was wrong with my daughter? Why could she not come back up to see me? Be with me? The midwife explained that the doctor would explain everything to me when I went down to see her.

My partner Dan was already on his way over to see me with his mum and my parents were on there way too, what do I do? What do I tell them? How is this even possible, what have I done wrong to be sat here in this position? How do I tell them all that there is something wrong but I didn’t actually know what? In those few minutes of wondering my partner had arrived, the midwife came back over and explained to everyone so I didn’t have to. Her name was Amber I will never forget that, she was so kind and caring and she looked after me so well I cannot thank her enough.

Dan and I went down to the SCBU, to see our little princess, I cannot describe to you how scared I was at this moment even after all this time. What was wrong? What had they done to her? As we went in we had to wash our hands in the big sinks with the big taps and that sterilising hand wash, even now if I ever catch a waft of that smell it takes me straight back to that moment, and its not really a moment I like remembering.

As we headed into the nursery, it was filled with babies, tiny little babies, it hit me hard, all these tiny little humans that have come into the world and their first glimpse of it was here, how is that fair? I tried my hardest to be strong, to not cry, I needed to focus, to find out what was wrong with my little girl. The doctor took us over to Emilia. She was tiny; I didn’t remember her being that small earlier that morning when she was with me. She was in a heated incubator with just her nappy on and wires, wires everywhere. She had this bruise on her leg; it was where I had lifted her legs up to change her nappy earlier that morning. And the pressure of my fingers along with her low platelet count had cause the bruising. We were advised not to lift her up, or take her out of the cot, for this reason.

Her blood tests had come back showing that she had a very low platelet count the lowest the doctor had seen for a very long time. He told us he was unsure as to why it was so low, but they were transfusing Emilia with platelets to try and boost her levels and get them to a safe level. Which in a new born they like to see it in the 150k range it can be slightly lower after a week but they need to be rising for them to not be concerned, Emilia’s were at 3k.

We sat there for a while taking in everything he had told us. He came over with this scary looking machine and as he was scanning Emilia’s tiny body he was talking to us, telling us that due to her low platelet count and the trauma of her birth he was checking for internal bleeding in her brain and in her vital organs. I thought I was going to throw up, what the hell?  How is this getting worse? How can it possibly get any worse? He turned to us and gave us the good news that Emilia hadn’t suffered any internal bleeding. She is so lucky, It really was such a possibility that it could of happened. Finally it wasn’t getting any worse.

We left Emilia for a while so we could go and explain what was happening to my parents and Dan’s Mum who where so excited to meet their Grand- daughter. Both Dan and I took it in turns to go in with them to see Emilia, Only one person was allowed at a time and they had to be accompanied by a parent. Not exactly how I had imagined introducing my first born to her grandparents I can assure you. It made me even sadder, I refused to cry in front of Emilia, because she needed me. I had to be strong.  It broke my heart that I couldn’t pick her up and cuddle her. All we could do was hold her hand and stroke her face.

Over the next few hours the doctors took blood samples from her and got her platelet levels checked. At first they rose at the end of the transfusion but then they dropped back down again an hour later. He asked for Dan to have a blood sample taken from him to compare it with mine to see if there were any incompatibilities. The results seemed to take ages to come back every time, but this one seemed to take forever, we were all hoping it would hold the key to what was wrong with Emilia. I had stupidly googled low platelet counts, and trust me I didn’t want the answer to be any of the results that came up. It made it worse I couldn’t concentrate when people were talking to me, by now I had so much going through my head (Never google an illness, you are always going to die!)

It was so hard leaving Emilia down in the SCBU at night time. But I had to go back to the ward, To sleep with all the other new mummies, the ones who were enjoying being with their babies it was so difficult being laid there listening to them cry, and listening to the mums comforting them, I cried myself to sleep. I didn’t know this until the next morning but Amber the midwife who was on duty kept coming in to my bay to check on me in the night, to make sure I was still asleep and I wasn’t sat there alone. She told me the following morning, she had been there for a full 24hrs at this point and was going home. She was amazing and was so nice we had lots of little chats and she really looked after me. I myself was being discharged too, they needed my bed.

Having to go home without my little girl was awful, I went home had a shower and something to eat and went back to the hospital. We sat with Emilia all day; her platelets were stabilizing but not enough for her to be allowed home. We were allowed to hold her now which was so lovely all the family took it in turns to come in and out to have a hold of her. My sister in law works at the SCBU and she was about to start her night shift. She was just starting a row of 4 night shifts. She wasn’t assigned to look after Emilia because they don’t allow family members to look after other family members, but knowing that someone that I loved and trusted and someone who loved Emilia almost as much as I did being there with her was so lovely. I am so lucky as this isn’t the luxury that all those other mums and dads with their tiny little babies got. I could at least leave at night knowing that if I was needed she would tell me before the doctors got chance too; she used to sit with her on her break and send me photos in the middle of the night, which was lovely because I was usually awake anyway! It helped me to doze off before I woke up again.

After day 5 we were allowed to sleep in the family room with Emilia, Most of her tubes were gone and her platelets were stable enough for them to be satisfied she would be fine in with us. It was the first night that we got to all be in the same room as each other. That first night should of happened days ago, and in our own home. I was so scared, I had been a mum for 5 days now and I literally had no idea what to do with this tiny human, I knew how to feed her and I could wing changing her nappy, but what if she started crying and didn’t want me to look after her, what if she wanted the doctor/nurse to feed her, to comfort her? Did she even know that she belonged to me and not them?

In the morning we had to wheel her back out to the nursery so she could be monitored, Nurses came in during the night to do tests etc. We were told that we would more than likely get discharged if her platelet level was satisfactory, but unfortunately it dropped again. It was heart breaking, I had built myself up throughout the morning and prepared myself for her coming home. We spent another night in the family room together.

The next morning the nurses did a hearing test with Emilia to check that her hearing wasn’t damaged. Trust me she has the best hearing EVER. She literally hears everything I say, and has a great knack at dropping me right in it sometimes!! Would not change that for the world thou! They were very happy with her and her platelet count was good so we were ready to go on our journey home. The doctor let us go home on the condition I brought her back the next day for another blood test, which I agreed!! I cannot tell you how happy, scared and relieved we were going home. We had to learn CPR for babies before we left, that really unnerved me, I then started panicking if I would remember it all, what I would do if I had to use it at home. Luckily I never had too! Emilia’s platelet count the next day had risen again, they believed that as my antibodies were leaving her system she was able to produce them on her own now. I did have a follow up appointment to check them again 2 weeks later and then a month after that.  Then we were finally told we didn’t have to go back again.

Emilia is now perfectly fine thankfully, She has just turned 4 and is off to school in September another milestone I have been blessed with. I just want to thank Naitbabies for all their support over the years! It really means so much to me!


Thank you for reading my story