Naitbabies is a small Charitable Incorporated Organisation, registered in the UK and run by families who have been diagnosed with Foetal and neonatal alloimmune thrombocytopenia – FNAIT. 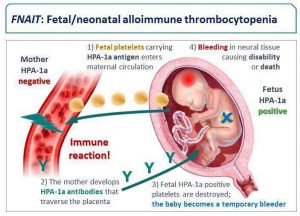 What is FNAIT
FNAIT is a life threatening bleeding disorder that results from incompatibility between mother and baby for platelet-specific antigens.

This incompatibility may cause the maternal immune response to produce antibodies against platelet antigens that have been inherited paternally. Antibodies then destroy fetal platelets, leaving the fetus or neonate at risk of hemorrhaging into major organs such as the brain, stomach, spinal cord, kidneys, liver and skin.

Babies are at serious risk of death or suffering lifelong disabilities.

Although well documented most people have never heard of FNAIT including, surprisingly, many obstetricians and midwives. Diagnosis is often not made until the second, third or even fourth pregnancy. The possibility of FNAIT being dismissed by clinicians as ‘too rare’ and bruising as ‘birth trauma’ or ‘ a newborn rash’. 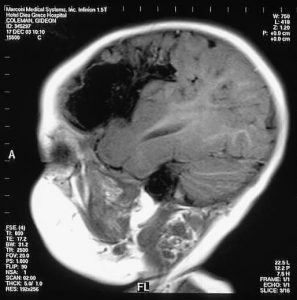 It is the most common cause of severely low platelets (thrombocytopenia) in an otherwise well neonate and may cause bleeding into major organs such as the stomach or spinal cord.

The most feared bleeding is into the baby’s brain – intracranial hemorrhage ICH. 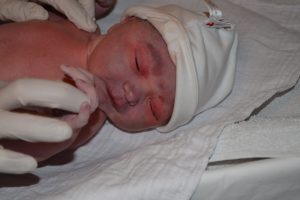 Affecting approximately 1:1000 babies the true figure is unknown, due in part, to misdiagnosis and under-diagnosis.

Frequently thrombocytopenia is mild and the affected baby remains largely asymptomatic and therapeutic interventions are not indicated.

Baby’s with severe thrombocytopenia may exhibit hemorrhaging into major organs such as the spinal cord or stomach at, or a few hours after delivery. Intra-cranial hemorrhage may lead to death (10%) or long term disability (20%) which approximates to 63:100,000 babies. 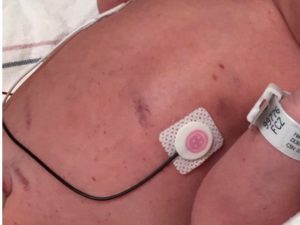 Signs of thrombocytopenia in a neonate are ICH, petechiae, ecchymosis, hydrocephalus, and bradycardia.

Milder visible signs (left) are not an indication of severity of platelet destruction and are often wrongly dismissed as bruising due to ‘birth trauma’.
There may be no external signs evident. 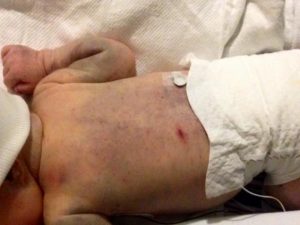 Treatment for further pregnancies is available. If subsequent pregnancies are untreated there is a risk that future platelet counts may get progressively worse. Although stressful, weekly IVIG infusions (with or without corticosteroids) have an extremely high success rate. 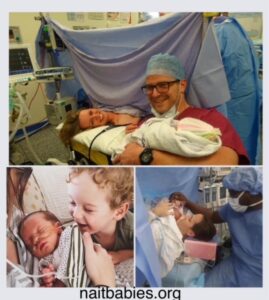 FNAIT is the platelet equivalent of the red blood cell disease HDFN – Rhesus disease,  which has been screened for since the late 1960’s. NO country screens for this condition although it is very well documented and has been since the 1950’s.

Antenatal screening for FNAIT should be standard and routine!!!!

Much rarer diseases are screened for 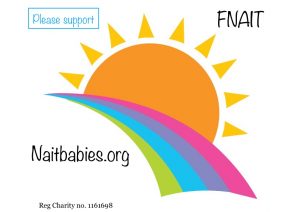 Based in the UK we are the only registered ‘not for profit’ for fetal and neonatal alloimmune thrombocytopenia and we offer a support network and help to sufferers worldwide.

We support research into FNAIT, its causes, treatment and prevention.

Naitbabies rely entirely on publicly donated funding. Our Board members are all volunteers and are very grateful for each and every penny/dime spared and use it wisely!!! We may be small but we are mighty in heart!!!!

If you have been diagnosed with, or suspect that you may have Fetal and neonatal alloimmune thrombocytopenia and would like to join our private parents support forum please email us here

Australians please register with
the Australian NAIT Registry below.

Click on the image below,
to view and buy from our Ebay shop. 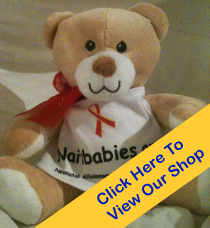 Always consult a qualified medical specialist in this field. Cases of neonatal alloimmune thrombocytopenia should be managed in specialised Fetal Medicine Units.

We are not medical doctors. All references and materials are for educational and information purposes only.