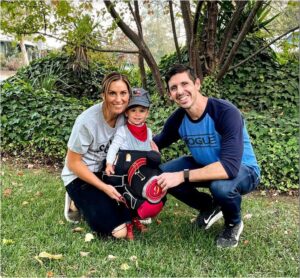 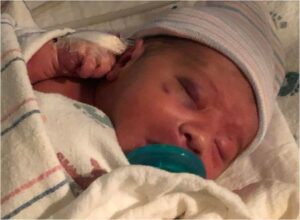 Our NAIT story is like most, but it has a bit of a plot twist. Our son was due March 2019 where we had a textbook pregnancy for 9 months. Every appointment showed a perfectly healthy mom and baby who was carried to full term. The day after his due date, I went into labor in the early morning, arrived at the hospital 5cm dilated and was immediately given an epidural. 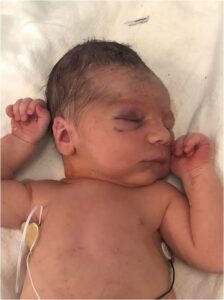 This is where the plot twist comes in – 15 minutes after receiving my epidural I encountered an extremely rare complication called total spinal anaesthesia. The epidural was misplaced resulting in my entire body going numb, stopping my breathing, causing me to code and be rushed to the operating room for a “crash C-section.” This rare complication where I was unconscious for the birth, may just be the reason our son survived NAIT. From the time I coded until our son was born was only 7 minutes. I was not awake for the first few hours of his life so this part of our story is told by my husband, Garrett.

There were dozens of doctors and nurses in the operating room due to the crash C-section. Pretty quickly they knew something was wrong given he had petechiae all over his body, a black eye and a bruise across his forehead where he had been sitting in the birth canal. A rush ordered CBC confirmed he had a very low platelet count of 3,000 (and the 1000th percentile for cuteness). Given there were so many specialists present when he was born and a fast C-section, we think these factors contributed to a quick diagnosis, treatment plan and no intracranial bleeding. The traumatic experience of the epidural complication may have just been a blessing in disguise. 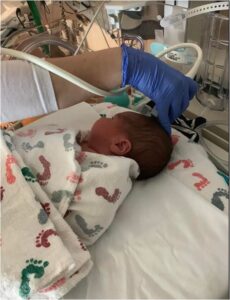 My husband was going back and forth from the recovery room and the NICU. The doctors said that our son, Grant, likely had one of three diagnoses: NAIT, an infection or something unknown causing such low levels. The treatment for all three was the same which entailed infusions of IVIG and donor platelets to bring Grant’s platelets up to a normal level. We were not allowed to hold him for the first 24 hours due to his high risk for internal bleeding and he was even given the nickname of “platelet baby.” He received two infusions of IVIG, four platelet transfusions and  two brain scans during our week stay in the NICU that both came back clear. 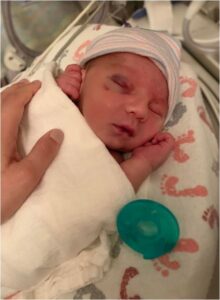 At one point we may have had to transfer to a nearby children’s hospital as they weren’t able to find a vein to administer the infusions. The doctors and nurses tried his belly button, each arm and leg and even tried his head. At the 11th hour a nurse was able to get a line started in the middle of the night. This was an incredibly stressful time for our family but we are beyond grateful to the talented doctors and nurses at John Muir Medical Center for identifying this rare disease fast and acting quickly on treatment.

After a week in the NICU we were discharged with platelets over 80,000 which was easily the happiest day of our lives. Grant was monitored closely by a pediatric haematologist over the coming days, weeks and months to ensure his platelets were stabilized. Due to the low count we were advised to defer procedures normally performed in the hospital until his platelets were over 100,000. Those included vaccinations, circumcision and frenelectomy, which he received weeks later.

Our pediatric haematologist also ordered genetic testing for our family where we confirmed NAIT to be the cause of our son’s low platelets at birth. The results showed that we have HPA-1a and HPA-2b incompatibility. With my husband being homozygous for HPA-1a there is 100% chance NAIT will occur in future pregnancies.

Happy to report Grant just celebrated his second birthday, is exceeding all his developmental milestones and is still in the 1000th percentile for cuteness confirmed by his pediatrician. Grant is also being promoted to big brother as we are expecting our second NAIT baby in July 2021. I started treatment of IVIG infusions to minimize the impact of my antibodies on the baby. Prior to starting treatment I submitted a blood sample to the Rallybio drug trial, which is working to develop a more therapeutic treatment for future families impacted by NAIT. If I am a match I will be donating my platelets regularly after my pregnancy to make the drug. 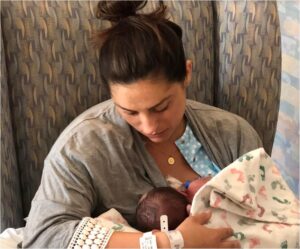 Our family is incredibly grateful to NAITbabies.org and all the efforts to bring awareness and education to this rare disease. Thank you for reading our story, educating yourself and for helping this cause. We appreciate you. 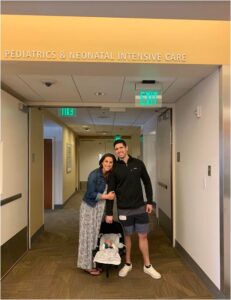