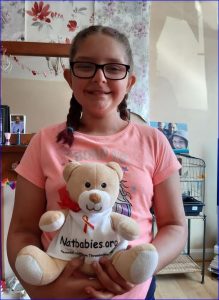 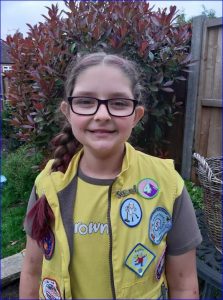 My name is Neve and I am 10 years old. I am a 1st Aylestone Brownie in Leicester. I am working to achieve my charity badge.

To earn this I need to choose a charity to promote, say why I chose that charity and what they do. Find a way to support the charity and write a letter to thank them for their work.

I am supporting and promoting the charity NAITBABIES because I was a NAIT baby when I was born.

I used some of my pocket money to buy a window sticker and a pin badge from their online Ebay shop. I will wear the pin badge for all to see and will explain what it is for. I also bought a teddy from the shop.

My parents didn’t know anything was wrong until after I was born. The midwife that delivered me noticed straight away that my left ear lobe was very bruised and her quick actions saved my life.

I spent time in intensive care and had to have two platelet transfusions during the first 48 hours after I was born.

I want to say a huge thankyou to Naitbabies and to the midwife who’s prompt action may have saved my life.

Mum Nicola said ‘’We have two other children as well as Neve, Lucas who is 13 and Finn who is 4 (both boys). We didn’t know anything about NAIT when Lucas was born, then Neve came along and was diagnosed with NAIT. I was tested while pregnant with Finn and he showed as not being affected by NAIT’’. 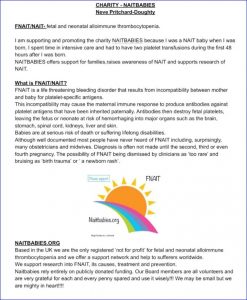