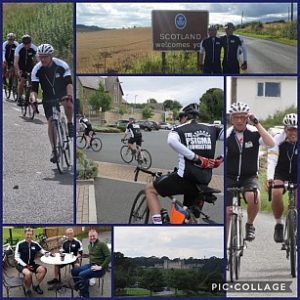 Following June’s epic randonnée through Normandy by a team of volunteers from Psigma’s London Head Office in aid of the Psigma Foundation, Simon Kay, Tim Wishart and Richard Hyder of Psigma’s Edinburgh-based team chose to salute their colleagues’ achievement and raise further funds by cycling 167 miles from Punter Southall’s office in Newcastle to Psigma’s Edinburgh office over the 5th and 6th of August.

Against the odds and despite mixed weather and a lot of hills, the team’s initial enthusiasm was sustained by a steady supply of bananas, ham sandwiches and Haribo.  This was delivered to us by our ‘wing man’ David Robertson, who ably manned the support vehicle and kept Simon, Tim and Richard going with much-needed encouragement and characteristic good humour.

Day one saw the team crack the century and we celebrated a ride of 103 miles along the Northumberland coast (gorgeous beaches!) and then westwards to Kelso and a few cold beers, a Viking-like BBQ and an early night.

Day two saw the team settling rather gingerly back in their saddles (ouch!) before whistling off along the Tweed then climbing 1000 ft. into the Moorfoot hills, from which the view over Auld Reekie and into Fife was just what we needed to spur us on … We were also further buoyed by the fact that it was all downhill from that point.

Our arrival at the office in Edinburgh was as surreal as it was satisfying. We hadn’t anticipated that there would be a visiting troupe of Korean tribal drummers drumming away right outside 7 Castle Street but the Edinburgh Festival does tend to throw you a few curve balls from time to time.

All in all, we’ve had quite an adventure and would like to thank all of our sponsors, whose kindness and generosity was never far from our minds, as well as the trustees of the Psigma Foundation, whose help in getting the message out there (and making sure that we looked dapper in our cycling tops) is similarly appreciated.

If you would still like to donate please visit our Virgin Giving page http://bit.ly/2uGfNLX . Alternatively, you can visit the Virgin Giving site and search for ‘Psigma’. We are very grateful for all of your support.