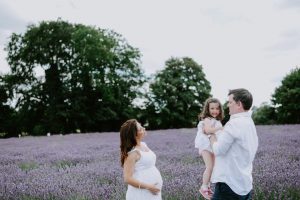 Hi! It took us four unexpected and long years to conceive our first child.  Jessie is the result of a successful IVF cycle, but unfortunately her twin sibling was naturally miscarried early in my pregnancy. The miscarriage was caused by a blood clot applying pressure to the cervix. At the time early in the pregnancy we were informed by the doctors that another miscarriage was highly possible and the chances of our baby daughter surviving inside the uterus was pretty much a 50/50 chance.

Fate was on our side and at around week 20 of my pregnancy, we received the fabulous news that the blood clot had reduced significantly in size and that my pregnancy was no longer considered high risk. That day I headed to the nearest baby clothes shop I could find on my lunch break and bought my daughter her first gift; a pair of socks. It was a small gift, but one of huge significance and we could now look forward to our long awaited baby! 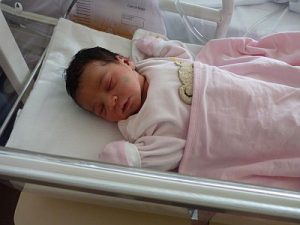 Jessie was delivered at full-term by emergency C-section. It was a difficult and long birth, but little did we know that this was just the start of things! In the delivery suite my husband and I noticed some purple bruises on Jessie’s cheek and shoulder. Having asked ‘what they could be?’ to the midwife we were reassured that these were ‘Mongolian birth spots’ and essentially birthmarks common in new-born babies, that would fade with time. We had received the all clear that our baby daughter was healthy and we were allocated a private room to start our family life together. We were exhausted, happy and life was wonderful as we rested together. 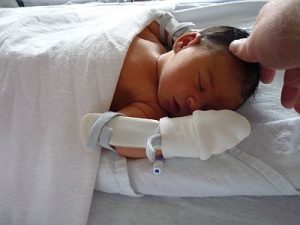 However the ‘Mongolian birthmarks’ became increasingly more noticeable as the hours passed by, spreading all over Jessie’s body. We found it very odd and continued to raise our concerns with several midwifes and nurses who entered our room that morning. We spoke to 6 staff members in total who all continued to dismiss the bruises as nothing to worry about.

At last, the 7th staff member we spoke to, Lisa Bird, a senior midwife who had looked after us the day before and now someone we are forever grateful to, entered our room to meet our little girl. Lisa identified something was not right and called for our daughter to have an examination. Jessie was rushed to intensive care and it was now clear to us from the doctors’ reactions that something very serious was happening to our daughter. We now know our Jessie was covered with petechiae and blood tests showed her platelet count to be only 6K. She was at risk of internal bleeding. The doctors explained that Jessie needed immediate blood and IVIG transfusions to try and stabilise her platelets. There was also a high risk of ICH (Intracerebral Hemorrhage) from the labour process and they wanted to complete a brain scan to check if there had been any damage sustained.

We couldn’t quite put in few words what was to follow after our daughter was taken from us to intensive care. The hospital and doctors didn’t really know about NAIT and what was wrong, let alone the best way to treat her. We subsequently found we were the first NAIT birth for over 10 years in the hospital, so to be fair it comes as no surprise.  Thank fully the brain scan showed there was no damage and they were able to bring Jessie’s platelets count up, albeit for a short period of time. The condition continued to attack Jessie and what followed was series of blood transfusions as the platelets yo yo’d up and down.

The NAIT diagnosis took a long time to come through as we waited for our genotyping blood results, NAIT is a rare genetic condition which doctors didn’t seem familiar with.  Helplessly waiting on information day after day was horrific whilst Jessica remained in intensive care. Today I understand that the whole experience caused me post birth traumatic disorder which I ended up going through for months after birth.

The treatment of our daughter was eventually taken over by one of the best haematologist doctors in UK, based at a sister hospital nearby. We were from this point onward fully briefed in what NAIT meant for ourselves, our daughter and later after tests being formally diagnosed within the 100% risk group, it was explained to us the consequences of future pregnancies. After several blood + IVIG transfusions, two weeks at hospital, our Jessie made a full recovery and her platelets stabilized on their own. We suffered no further setbacks and are truly blessed to have a perfectly healthy little girl!

When our daughter was 2.5 years old we found out that I was again pregnant. This news came as a huge shock to us, how could this be possible after several unsuccessful fertility treatment cycles to now get so easily pregnant? And this time naturally? What about NAIT and the chances for our baby? The follow nights were spent in a dazed and worried state. We had to see a doctor and understand the treatment, the risks and the viability of the pregnancy.

Fortunately, we were seen pretty quickly at 7 weeks pregnancy by a great fetal medical doctor, Dr Elisabeth Peregrine, based at Kingston hospital, UK. We were briefed on the direction of treatment and  as many other UK patients our doctor decided on following ‘Dr. Bussel’s protocol. This was our doctor’s first NAIT treated pregnancy and we worked together throughout pregnancy on understanding treatment, side effects, and other concerns related to NAIT. I did a lot of research throughout and Dr. Peregrine was brilliant in considering new information. Whether it was recently published academic information or even discussion from NAITbabies parents support group, we moulded my treatment plan together.

We started weekly IVIG infusions, plus daily prednisone steroids course from week 20. Both medications were doubled from week 32. The side effects were nasty to start with but became more manageable as my body started getting used to all the medication. Nothing though will compare to the emotional side effect of the actual condition. Knowing that your immune system is attacking your baby is horrible and made me feel so powerless and guilty. I had a very stressful pregnancy; I could not sleep, I was tense throughout it and I wanted this baby born as early as safely possible. 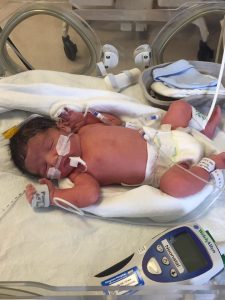 I went into normal labour at week 34 and our baby boy was delivered by Dr Peregrine herself. Our doctor had in place a plan of action for the birth considering NAIT and it was extremely comforting to have Dr. Peregrine in the delivery room.

Our baby boy, Lucas, was born with a platelet count of 64K. Despite all the treatment our boy was still born with a significantly low platelet count. However we were now knowledgeable NAIT parents and we knew that the odds were in our favour. We knew our baby would have to receive blood transfusions, but all would be ok. We were equally delighted to hear that brain ultrasound result came back all clear. Our baby boy, Lucas, left hospital after 9 nights and only needed one blood transfusion. He was completely discharged as outpatient a couple of weeks later after leaving hospital. We had been blessed again and now also have a wonderful little boy.

I do appreciate being a NAIT mum. The traumatic birth of our first daughter and the second very hard treated pregnancy has made me revaluate my personal and professional goals. I often wonder if I would appreciate my kids as much if it was not for the issues we went through.  Reading other NAIT mums stories make us realise how fortunate we are and how grateful we must always be.

We feel our journey with NAIT hasn’t ended yet. We have decided not to have any more children. I personally could not go through another treated pregnancy and the emotional rollercoaster involved. But I hope to continue to be an active member of the NAITbabies.org supporting group; sharing our knowledge, experience and helping other families just like us. 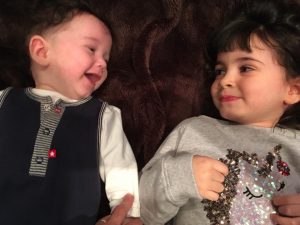 * I would like to dedicate this article to our brilliant doctor, Dr. Elisabeth Peregrine who successfully treated and delivered our NAIT baby and the midwife who carried out our weekly IVIG infusions, Mrs Perrine Dhaisne. Both based at Kingston Hospital, Surrey, UK