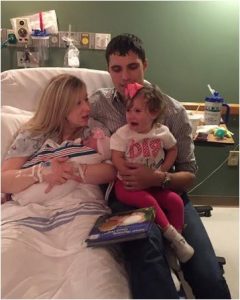 I was induced on October 14, 2015 with our second daughter Kinsleigh.  She was born at 6:15pm that evening and weighed 9 lb 3 oz and was 21 inches long.   We had a wonderful uncomplicated delivery.  The following afternoon, I noticed bruising on Kinsleigh’s abdominal area and groin.  We had the nurse call back in the on call pediatrician.  They took her to the nursery and checked a CBC and platelet count.  They brought Kinsleigh back to my room and about an hour later and told me that her platelet count was 8,000 and that she needed to go to the NICU.  My husband had gone to get dinner and I was alone.  I am a nurse and the news felt like a ton of bricks hit me.   I immediately called my husband and he returned back to the hospital.  Once he got back, we were able to go the NICU and see Kinsleigh.  The charge nurse told me they needed to transfer her to another hospital downtown about 20 minutes away in order to have a higher level of care and so that the pediatric hematologist and neonatologist could evaluate her.  We started the transfer process and soon she was on her way to the NICU at the children’s hospital.  I requested to be discharged, which my doctor allowed, in order to leave and be able to be with Kinsleigh. 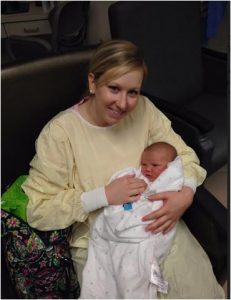 Kinsleigh spent the following 5 days in the NICU with fluctuating platelet counts.  Just as we seemed to get ahead on her count, a few hours later they would drop again.  On day two in the NICU, the pediatric hematologist decided to try and give her IVIG to aid in increasing her platelet count as matched platelets were not available to give her.  This helped stabilize her count and on day 5, we were discharged from the NICU with outpatient follow up.  We were so happy to be able to go home and get adjusted to being a family of four.   A few days later, I noticed excessive bleeding from her umbilical cord stump and knew that something was wrong.  We had not yet had our follow up appointment with her hematologist so we went back to the children’s hospital ER.  Kinsleigh’s platelet count was 15000 so they decided to admit her again.   We were in the hospital another week with more IVIG treatments as they did not have any matched platelets to give Kinsleigh.  This time, her platelet count followed a more stable trend and we were able to return home with a known diagnosis of NAIT.

After many follow up visits and one additional hospital stay, her pediatric hematologist was finally able to discharge us with follow up with her regular pediatrician.  Not knowing a lot about NAIT was scary for us.   I am so thankful to have found this informational and helpful group that offers research based treatment plans and support.   We are now expecting baby girl number three and are due the end of May.  I am getting weekly IVIG treatments and seeing a maternal fetal medicine specialist in hopes to prevent bleeding complications in the baby.  We are looking forward to our third daughter’s arrival! 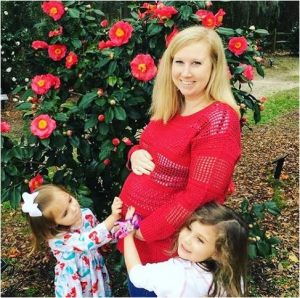