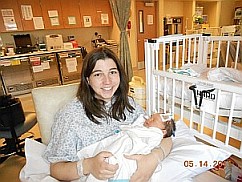 Our NAIT story began about 14 hours after my son was born.  I was induced 3 days before my due date because my doctor was concerned with the extra amount of fluid I had and was nervous about the umbilical cord coming first if my water broke on its own.  Long story short, after 11 hours of labor my body did not progress at all and I was taken in for a C-section.  I was heartbroken, but it was a blessing in disguise.  My son came out at almost 9 pounds and with a head full of hair. 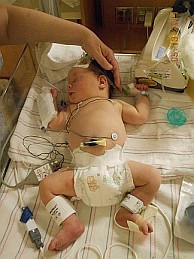 He was beautiful.  I am so grateful for our first night together, I got to spend the night with just him and me in our room, waking up every two hours to breastfeed, it was bliss.  The next morning was the hardest day of my life.  My pediatrician came to do the routine newborn check-up, they took my son out of my room.  Not too long afterwards the pediatrician came in to discuss the little bruises that had appeared on my son’s legs.  I had noticed them that morning, but being naive, assumed they were caused by the doctor during C-section.  I later learned that they are called petechiae and are a common sign of NAIT.  I was blessed with a very knowledgeable pediatrician, who had witnessed NAIT before, this is not very common.  He told me my son’s bruising could be a sign of low platelets, at the time that didn’t mean much to me, figured it was something common that could easily be fixed.  They brought my son back and my husband arrived and we happily waited for our family to visit.  As soon as his blood test results came in everything changed.  They came and took him from my room and placed him in the small NICU our hospital had.  Our family could see him, but no one could hold him.  His platelets came in at 13,000.  We were so uninformed that we didn’t fully understand the extent of what was going on. 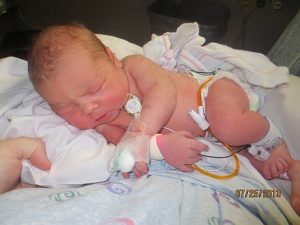 It all set in when they told us that they didn’t have the treatment he needed and they were sending for the helicopter to come and take him to a children’s hospital an hour away.  No one was allowed to go with him, my husband left to drive and meet him at the hospital, I was left to heal from the C-section.  I understand now that I was truly in shock.  It was terrifying to send my baby away, less than 24 hours after he was born, and not be able to go with him. 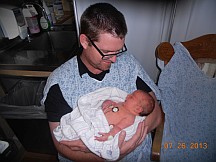 At the children’s hospital he received several doses of IVIG and 2 platelet transfusions.  I was able to be released the next day and go down to join him.  They ran over 10 tests on him to rule out all possibilities, because of his age and size they could only draw one to three tests a day, so this process felt like a lifetime.  They eventually ruled out all other possibilities and determined that the most likely cause was NAIT, said that could be confirmed by having my husband and myself tested.  After 9 days in the NICU my son’s platelets were finally holding count, they released him to go home with a count just over 50,000.  Had I known then what I know now I would have pushed for a higher count before being released.  We had to follow up with our pediatrician within a week of being released, that blood test came back just over 100,000, it finally felt like our NAIT battle was over.

At this point I still had so many questions and couldn’t find much information about it anywhere.  Everyone kept telling me how extremely rare it is, my OBGYN, who has been practicing for over 20 years, said I was his first patient, he had never heard of the condition before me.  The day I saw the public post on Facebook from naitbabies.org was a life saver.  I found an entire community of people with the same condition, who knew more than most doctors, and could answer any question I could possibly think of.  It was after talking to them and reading their stories that I really realized just how truly blessed we were, my son didn’t suffer any bleeding.  I was so against being induced and having a C-section, but I can only imagine how different my story might be if my son went a week overdue, or he went through hours of hard labor, I am so thankful for the healthy baby I was given.

The group gave me the confidence to try a treated pregnancy, after testing my husband and I were told we were in the 100% group, meaning all of my pregnancies would be affected.  When my son was 18 months old I got pregnant with our little girl.  We found a fantastic MFM who had actually treated NAIT before.  He determined that I would start IVIG treatments twice a week starting at 20 weeks.  Because I am an hour away from the hospital that can treat my condition and because I had a 2 year old at home, I asked my MFM if I could please do home treatments.  He agreed, but I had to do my first 2 in the hospital to make sure I didn’t have a reaction.  Home treatments were definitely better for me, I can’t imagine how hard it would have been to go to the hospital every time.  IVIG and I didn’t get along.  I would basically be sick for at least half of my treatment, go straight to bed afterwards, and be sick the entire next day.  It was horrible.  I was trying my best to drink the recommended water, but it gets difficult when you’re sick at least 4 days out of the week.  My treatments would last on average between 8-9 hours.  My husband and mom would take care of my son because I was completely incapable during my IV, I pretty much just slept to keep from being sick.  After my blood tests came back it was determined that the IVIG was making me severely anaemic (I have since learned this is more common for my blood type, which is A+).  I had to go into the hospital for an immediate blood transfusion.  My doctor and pharmacy decided that changing IVIG brands would be the next best step, I also got reduced to one treatment a week instead of two.  Changing brands was like night and day, I was no longer getting sick and I could actually stay awake and walk around during my treatments.  It was such a blessing!  My doctor performed PUBS at around 32 weeks, this is where they stick a needle into the baby’s umbilical cord to get a sample of blood to test platelet count.  My daughter’s count was much lower than we were hoping, I can’t remember the exact amount, but I believe it was between 30 – 40,000K.  My doctor increased my treatments back to twice a week, added the steroid prednisone, and moved my C-section up to 37 weeks.  My daughter was born and was sent straight to the NICU for testing.  Her platelets came back at 131,000 and it made everything worth it!  She was released from the NICU and into my room the next day.  The prednisone made breastfeeding a real struggle, a possible side effect is delaying milk production.  After two months of constant visits to the lactation consultant I was eventually able to exclusively breastfeed my daughter. 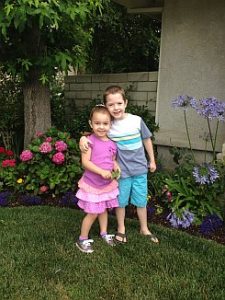 We feel like our family is complete and we are so thankful for our two healthy babies, for the access to incredible medicine and knowledgeable doctors, and for this non-profit that has provided such an awesome community and source of information.  I pray that someday this will be a common test performed with every pregnancy.  I hope that sharing my story will in some way help that cause.