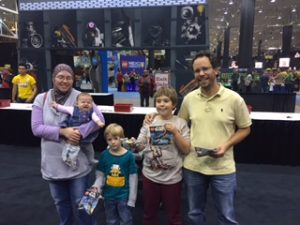 We are very blessed to have three healthy children despite a diagnosis of NAIT.

Our oldest, Yunus (Arabic for Jonah), was born with no complications, a product of a low risk pregnancy and had only standard checks after birth so his platelet count at birth was never known.  Perhaps it was a little low, but not enough to show any signs; perhaps instead I was sensitized at his birth and had no antibodies before then.  We will never know.

5 year later Zakariya was born.  Curiously, his birthday falls in March, during the NAIT awareness week.  I had a low risk, very similar pregnancy with him.  I was in labor without an epidural for much longer than I hoped for with him which felt like the worst possible pain at the time.  But it wasn’t.  Everything looked good when he was born but 2 hrs later he was taken for his bath and the pediatrician on call came to tell me he had petechiae and wanted to check a CBC and reassured me it would probably be fine, and likely was just due to the fact that he was almost a 9lbs baby going through the birth canal.  Having just graduated medical school myself, that seemed very reasonable and didn’t concern me.

However, when hours later a neonatologist came in the room I knew something was wrong.  She explained that his platelet count had come back at 9,000 and they had repeated it to make sure it was not a lab error and the repeat was 7,000 so he was transferred to the NICU and was currently receiving a platelet transfusion.  She reassured me that since his exam was normal most likely he didn’t have any significant head bleed but they would get a head ultrasound in 2 days to make sure.

Those were very long two days but the ultrasound came back perfect and he made a complete recovery and is a cute, healthy, crazy and with a special side of EVIL 5 year old now!  We will be forever grateful for him as many other families have had babies with critical platelet counts pass or be neurologically devastated.

Last year we decided to try for another baby.  We did blood work a year after Zak was born and knew we were in the 100% group for platelet antigen 1.  I typed as 1bb, my husband as 1aa, so we knew it would be a rough road with a treated pregnancy.

What made it even more stressful was the fact that I now work full time as a pediatrician and my husband stays at home with the kids.  Any complication that would compromise my ability to work could have devastating financial impact for us as well as compromise my health insurance status.

Thankfully we had an awesome MFM team that worked around my schedule and minimized appointments and I had most of my IVIG infusions done at home with a wonderful home care nurse and in July 2016 Hajar was born via C section as we did not want to go through PUBS. Her platelet count at birth was 129,000, treatment worked! 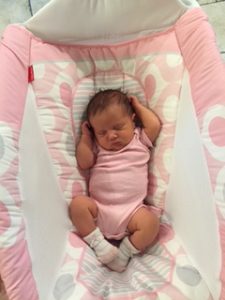 Hajar (Hager) was the slave wife of Abraham and in Islam when we visit Mecca and perform pilgrimage; all pilgrims follow her footsteps that resulted in the spring of zam zam.  From the first time I visited Mecca I decided that if I were to ever be blessed with a daughter I would name her Hajar!