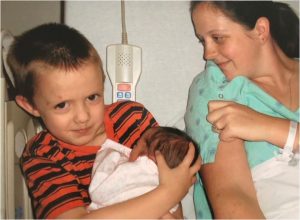 When I was pregnant with Caleb, everything was “normal”. I was gestational diabetic but I thought that was the biggest hurdle. I went into labor 3 days before my due date. I was in labor for 12 hours, pushing for an hour. He was what they called “sunny side up” meaning he was facing up instead of down when he came out which meant he was harder to push out and they almost used the vacuum. But finally, he was born on Sunday November 24. 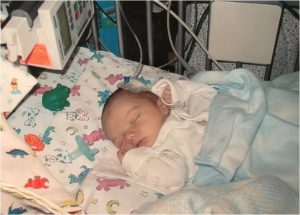 When they placed him on my chest, I noticed he had a bruise on his rib cage. I alerted the doctor to it and she told me it may have been the result of his rough ride through the birth canal. I kept it in the back of my mind but let it go. Mom left to go get me Wendy’s to eat and while she was gone, the nurses took Caleb to the nursery for the baby stuff.

When mom got back, she went on a hunt for Caleb as he’d been gone for over an hour. I didn’t realize how long she had been gone but when she came back, Caleb was being wheeled in by the pediatrician and I could tell mom had been crying. The doctor explained to me that while during the newborn exam, the nurses noticed he was bruising and developing petechiae. Petechiae is small pin point bruises cause by bleeding in the capillaries. She explained to me that they don’t know why this was happening so they were calling Riley children’s hospital to have him transported.

Caleb was only 8 hours old when they took him. I had pre-eclampsia so I couldn’t go with him. Mom scrambled and found a ride to go up with him. He left Bloomington Hospital around 9pm. By the time he left, the back of his head had bruised, his bottom bruised and the roof of his mouth turned black from trying to nurse.

They got him up to Riley and ran tests. It was determined that he had a platelet count of 3k…a normal count is well over 150k. They also did a CT scan on his head and he had a slight brain hemorrhage. At some point, they had an idea of what was going on but they needed me to confirm. He had several platelet transfusions but they didn’t boost his numbers very high.

Monday evening, I was told to transfer to IU so that they could confirm what was happening. After some blood tests, they confirmed that Caleb had Neonatal Alloimmune Thrombocytopenia (NAIT). Once they had the diagnosis, they took my platelets to transfuse him with and also used IVIG.

Caleb ended up spending two weeks in the NICU at Riley. After a month he was considered “cured” with a normal platelet count that stayed up on its own. He does not have any lasting effects of this. He is now a happy, healthy 16 year old!

I knew another pregnancy would be a challenge but I didn’t really know all it would entail. When I found out I was pregnant with our second child, the first step was to get a blood test to confirm that I needed treatment. My OB didn’t have any experience with NAIT so he immediately referred me to a MFM, a maternal fetal specialist.

My MFM was amazing! She was knowledgeable in NAIT so I felt reassured that I would get the care needed to keep my baby and me safe. After a blood test confirmed that we indeed have the 100% incompatibility to cause NAIT, we set a treatment plan. I would have monthly appointments and ultrasounds at each of those appointments to check for bleeding. I would start weekly infusions of IVIG at 20 weeks until delivery. I would also have a PUBS procedure done at 22 weeks to make sure treatment was working. And I would have a csection delivery.

We had decided that at my appointment right before treatment started that we would find out the gender at around 20 weeks. I had a measurement ultrasound around 18 weeks and Jason (my husband) wasn’t able to go with me. I wasn’t expecting it but they asked me if I wanted to know the gender. I was torn because I wanted Jason with me but I decided to find out then. They told me”it’s a girl!!” I cried tears of joy! 😍 After that appointment, I bought a onesie that said “Daddy’s girl” and took it to Jason at work. He was thrilled! We knew her name would be Aurora as that’s the only name we discussed.

At 20 weeks, I had my first treatment. I had this infusion in the hospital to make sure I didn’t have any adverse reactions. This took all day and was very boring. This first treatment was pretty uneventful. I went home that night and everything seemed ok. The next day we drove to Illinois for a bridal shower. That’s when all hell broke loose. My head felt like it weighed a thousand pounds and was throbbing out of my skull. I couldn’t see straight and I probably had a slight fever. I felt extremely nauseous. Light and sound made it even worse and so did the bumpy road. It was HORRIBLE! I should have went to the ER but I just slept. (Come to find out I probably had aseptic meningitis from the medication being ran too fast)

After that experience, I was extremely nervous going into my next infusion. But, I was advised to drink a billion gallons of water (not really but I’m sure you catch my drift) and to take Tylenol and Benadryl to try and offset the side effect. That worked! I had a dull ache but it was manageable.

After those first two infusions, they performed my PUBS procedure. This is performed in an OR setting. I was very nervous. I had never had surgery before so this was new to me. I was on the OR table with the drape in front of my face. Jason knew how nervous I was and allowed my mom to be with me while he waited in the waiting room. He was told this procedure would be about an hour. They gave me the medication to numb my belly and I started to panic. They upped my meds to calm me down. Although I was just laying there, I knew it was taking a lot longer than they said. Just as I asked them to let Jason know what was going on, they said I was done. I found out that it took longer for one, because I was at a teaching hospital and they were learning (😳😡) and for two, because I had started contracting and they had to administer drugs to stop them…I was only at 22 weeks so she wouldn’t have been viable had they not stopped the contractions. Luckily, they did stop and the best news…her count was great! Treatment was working!

Going forward, I was able to do my infusions at home in the care of a home health nurse. She would come early every Friday and stay all day while I had my treatment. This worked awesome because I had to care for Caleb. Every once in a while she’d drive us to Jason’s work so I could get out of the house. Treatments mostly went off without a hitch…until the end. My veins started becoming irritable after being stuck weekly. We would always find one to work with the infusion though.

My C-section was set for December 18 which made me 38 weeks and 2 days. The day prior, they had me come in to donate my platelets just in case she needed them at delivery. The delivery date came and I was super nervous. Again, I’d never had surgery so I didn’t know what to expect. The nurses came in to start my iv. I let them know where to stick me since all the abuse my veins had endured. I told them to use the veins in the side of my wrist. Did they listen? Nope. And they blew the vein in my hand. I yelled at them (oops) and they sent in the anaesthesiologist and he numbed my hand and got it first try. I told him thanks for listening to me 😋 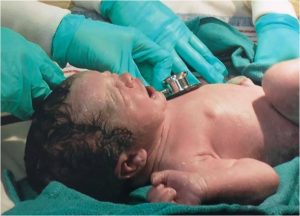 Delivery time. They got me all prepped and brought Jason in just as they were pulling her head out. We had a beautiful baby girl! All 6 pounds 2 ounces of her! Our tiny peanut! They took her blood to get a platelet count while they sent me to recovery. I had already asked if she could come with me and they agreed. They said she could stay with me until we found out if she needed higher care. I was in recovery when we got the news…

WE BEAT NAIT!!! Her platelet count was 125k!!! Yes, that’s still lower than normal but she was out of the danger zone so it was a success! My baby girl was perfect! 😍 despite her being tiny, she did so well! 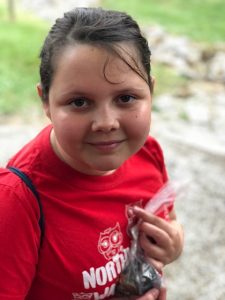 We were able to bring her home at 18 hours old and never looked back. We were so thrilled! It was definitely different bringing a brand new baby home instead of a 2 weeks old baby. I felt on top of the world. And Caleb was smitten with his baby sister. Aurora is now a healthy 11 year old. 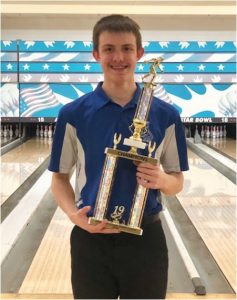