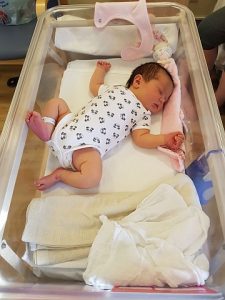 We were so thrilled when we found out we were pregnant in July 2016.  Despite having a healthy pregnancy, I felt anxious after every twinge, and before every scan and check-up.  It was understandable really after an early bleed at 6 weeks when I thought I had lost her, plus it’s been 25 years since my son Karl was born (quite an age gap) so I felt like a first time mum again! I listened carefully to the advice of my consultant and midwife, eating healthy and taking the right vitamins, and doing everything I could to ensure that my growing baby was given the best possible chance of a heathy start. I couldn’t wait to meet my little girl and was so nervous and excited when my consultant advised me that it would be safer to deliver her at 40 weeks, if she had not made appearance before that!

I waited patiently and, at 40 weeks and 1 day, my consultant asked me to go in to hospital for a check-up, plus I had experienced reduced movement.  My little girl was monitored and all was well, we were so relieved; I was to be induced later that day.  Two days later Sofia arrived in to the world, weighing a healthy 8 pounds, 6 ounces with the help of gas and air (I will spare you the detail).  It was a little after 8 at night when Sofia was born and we were told that we could go home if we wanted to, but only after the nurse had given Sofia the all clear.

We noticed that Sofia has suffered some bruising on her left leg, and arm, including what we thought was a small birthmark across her tiny nose. The nurse showed some concern about the bruising, but we thought this may have been caused by the delivery.  A pediatrician was consulted and he was little concerned about what he described as a tiny pin pricked rash on her face, arm, leg and groin.  I was suddenly filled with dread and wondered what could be wrong. We were asked if some bloods could be taken from Sofia (just to be on the safe side) and we agreed.  We were told that we could take her home or wait for a few hours for the results to come back, but essentially Sofia was well so we could take her home, and in any case, we felt assured when he told us that if there was anything to worry about he would call us.  We decided that night to take Sofia home.  I remember leaving the hospital in a bit of a daze and kept staring at Sofia not quite believing that I had just given birth, she was perfect and all those months of worrying left my thoughts as I looked forward to starting family life together; I couldn’t be happier.

Not long after we had washed Sofia and I had a shower, Scott received a call from the hospital and we were advised to bring Sofia back to the hospital right away, something about low platelets.  I felt complete panic as we gathered some things and put Sofia back in her car seat to make our way to the hospital (it was now early hours in the morning) and it whilst we were getting in to the car the hospital called again to ask us how long we were going to be because further results had come back to show Sofia also had a raised white cell count and we were to bring her to NICU.  I felt physically sick with worry; our precious little girl was poorly, and the drive to the hospital seemed to take such a long time. Sofia was taken and stripped down to her nappy and we were told that her rash had spread or was more pronounced, I don’t remember.  The doctor wanted to perform an MRI on her brain (but said not to worry it was just a precaution) and do some further tests as they suspected she had an infection.  We were immediately shown to a room in the NICU which was to become home for the next week.  I was so frightened I could hardly breathe and wept as I imagined the worse – why did we take her home! 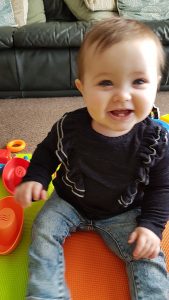 My little girl was hooked up in an incubator and there was nothing I could do to help her.  I felt my whole world had come crashing down.  NICU gave her antibiotics to help fight the infection and we were told they would let us know any news as soon as they could.  This was my worst nightmare and all I wanted to do was cuddle my baby girl who had fought so hard to get here.  I remember it becoming daylight and later that afternoon we were asked to give blood so they could do some tests. We were told they suspected NAIT and something about incompatibilities between Scott and me, but we would have to wait for the blood results.  I had never heard of NAIT so I looked it up on the internet and held my breath as I absorbed as much information as I could and prayed for my life that she was going to ok. The results confirmed NAIT and I was told that I have an antibody that had destroyed my little girl’s platelets (she a count of 10K). The MRI taken earlier that morning had showed no sign of bleeding; I sighed with relief but she wasn’t out of the woods yet.  I remember asking the consultant if she was going to be ok, and he looked me in the eye and said that he really hoped so but there was no guarantee (not what you want to hear, but I knew that she was in the best possible place and I held tight to that thought)! Once Sofia had a platelet transfusion I was able to feed her every two hours and I breathed in every inch of her as I held her to me.  I cherished those moments and I can still remember cuddling and whispering to her that she was going to be ok.  Sofia’s counts continued up and down over the coming days but eventually she was well enough to join us in our room in the NICU in a little cot with wheels.  I was absolutely elated and the wonderful staff supported me in feeding and looking after her as she had a little heart monitor attached to her.

I remember a nurse called Heidi who had looked after me in on the ward whilst I was being induced (and incidentally broke my waters) came to visit me and we talked about NAIT and kindly shared her experience of having untreated and treated NAIT babies and tried to answer my questions.  It was then that I realised just how lucky and how blessed we were that Sofia was going to be ok.  Thank you Heidi I am so grateful to you for our chat and your encouraging words. It was here that I learned about the NAIT babies support group and I signed up whilst still in NICU.  Stacy, you will remember me messaging you.

Sofia was doing well and I was finally going to take her home, again.  When her platelet count dropped in the morning that we were told that we could take her home I felt crushed. During this time Sofia had blood in her nappy again and I cried for my darling girl.  I felt so guilty that my body had made her so poorly, and I still struggle with that if I’m honest.  The next morning Sofia had yet another blood test taken and as I watched her scream with discomfort I felt completely helpless. But there was good news, her platelet count had risen and we were told that we could take her home later that day.  That day was Mother’s Day, and I don’t think I could have been happier.  I was excited, yet terrified at the same time. 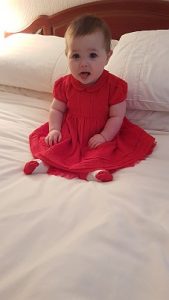 As we left the hospital once again on our journey home, I couldn’t believe just how fortunate we were.  A special visit from her brother, niece, and my mum and dad followed and we spent the afternoon just staring at her.  A few days later and the months to follow Sofia had regular blood tests to check her platelet count and each time they got better and better.  My little warrior is 1 years old on the 22 March and is amazing.  We are so proud of her and her achievements.  She has Scott and me running around after her and we couldn’t feel more blessed to have such a brave, awesome little girl in our lives.  I often find myself staring at her and think about all she has been through and I am lost for words.  I would like to thank the NICU and NAITBABIES for all your support over this last year.  You are truly wonderful! 🙂