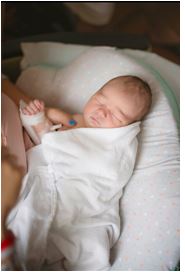 My NAIT journey begins with a totally normal pregnancy.

My due date for my first child was July 8th. After no progress, I was scheduled for induction on July 15th. My hospital stay was much longer than and not as smooth as I had planned.

Labor lasted about 56 hours. Once doctors were aware that I had an infection and fever, which was causing hallucinations, they eventually insisted on a C-section (not part of my birth plan). In the OR the power flashed three times-turns out the hospital was testing the generators. Our doctors had not been informed-talk about scary.

Finally, my son was born on July 18th at 1AM and rushed off to be tested to see if I had passed the infection to him. This was LUCK. Or as the doctors put it “serendipitous”. If this test had not been done we would not have been aware that something was wrong.

My husband and I were in the hospital room sleeping, when a doctor came in the room to tell me that something was wrong with my son. By this time it was probably 5 in the morning-after a long 4 days in the hospital we were exhausted and very confused. When we both woke up a little more, we asked for our son and the doctors, because we had no clue what was going on.

They told us that our little boy was born with 13k platelets and they were doing an ultrasound to see if he had a brain bleed and would be in the NICU. They assumed he had a condition called NAIT and he would be receiving IVIG and platelet transfusions. We were very blessed and my son only had an intracranial bleed that went away in a few days.

My son’s platelet levels dropped as low at 8k and after more IVIG and platelets they slowly rose. We were discharged on July 21st and had to continue getting his platelets tested every three days. During this time, Dr. Timothy Mitchell neonatal hematologist, would call me personally to tell me the results. My son’s platelets dropped one more time and Dr. Mitchell suggested one more infusion and to return to the NICU for an overnight stay. We continued to watch his platelet levels rise and eventually were cleared.

This was a very scary time for my husband and family. However, we were blessed with the very best care and extremely educated doctors. I am so thankful for my infection (strange thing to say) because if not we would never have known. My son could have had a bleed that would have left him with a severe disability or worse.

After my son’s birth me and my husband were tested and are in the 100th percentile. Meaning all of our children will have NAIT.

I am currently undergoing a “treated pregnancy” due to the NAIT 100% diagnosis for all of our future children. Treatment for me has been once a week IVIG infusions at 20 weeks pregnant and steroids, at 32 weeks infusions increased to twice a week until delivery. This treatment is to help prevent a bleed in utero/during labor/after birth. Once again, during this pregnancy all my doctors have been simply wonderful. My scheduled C-Section for our little girl is on March 31, 2018. I will update you after delivery to tell you how my first treated baby is doing!

My husband and I know how blessed we are and know our experience could have been a lot scarier and more severe. We pray for our NAIT family and NAIT babies every day. God bless you all. 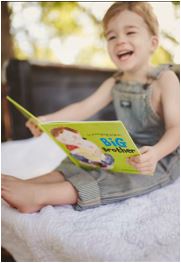