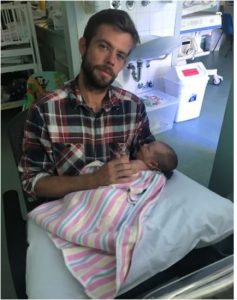 Our NAIT journey started on Sunday 25th of November at 3:53pm, in a country town in the Southern Highlands. My contractions had started 2am on the Saturday morning, so it was a hard and exhausting labour. After an hour of pushing I needed a little help, we had a vacuum assisted delivery. We finally met our beautiful boy Oliver, he was so perfect and we fell in love instantly. During his checks right after the birth one of the doctors were concerned about the rash developing on Oliver’s tummy, it was petechiae (bleeding under the skin), this progressed to purpura. Oliver was taken away for more tests. His platelet count was at 13,000 (meant to be between 150,000 and 450,000) they then dropped to 3,000 when tested again. Oliver was being rushed to the neonatal intensive care unit at The Royal Women’s Hospital in Randwick. I was discharged around midnight to make my own way down to Sydney, about one hour and a half drive, my partner had rode with Oliver in the ambulance on the way down as we didn’t want to let him out of our sight. I was able to visit him as soon as I arrived at the hospital, he was stabilised but remained in a critical condition, he was covered in wires and hooked up to the machines, everything around us was beeping, it was one of the worse feelings I had ever experienced and a shitty start to parenthood. 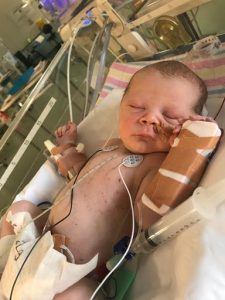 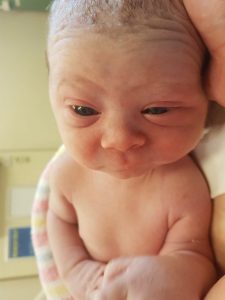 Oliver had an Ultrasound early the next morning to look for any intracranial bleeds, being a vacuumed birth they were concerned this may have caused a bleed in the brain. Ultrasound came back perfect. They double checked with an MRI, also came back perfect. There was a small bleed in his stomach, doctors believed this was from the tube that was placed into a blood vessel in the belly button for blood testing as they found it difficult to find a vein anywhere else, but within a day that had resolved itself which was confirmed with another ultrasound. He was given a platelet transfusion that afternoon and had his blood tested twice daily because his transfused platelets were being used quickly. My partner and I were tested to confirm NAITS. During these tests it was also confirmed that Oliver had a rare platelet type, this explained why the transfused platelets were not lasting long. This platelet type was so rare sometimes it came down to being the only bag in Australia. Oliver became very popular with the Red Cross blood bank. We saw an improvement after Oliver was given the correct platelets.

We were discharged at a platelet count of 80,000 and in hope they would start to rise without the help of an transfusion. Unfortunately Oliver’s platelet levels kept dropping and was given numerous transfusion over two months.

Oliver also developed Allergic Colitis, which is where an infant’s immune system overreacts to proteins usually found in cow’s milk (which he got from my breastmilk). This condition can cause blood in the stool, which with platelet issues became a little complicated and also meant two very nervous parents and many bloody nappies. I was placed on a dairy diet and the bleeding stopped within two weeks.

We had been discharged, transferred and re-admitted for weeks between three hospitals until he finally started to maintain and creating his own platelets. We had weekly blood tests and appointments with our paediatrition, then fortnightly when Oliver’s platelets continued to rise and reached 140,000. As of the 13th of February 2019 Oliver’s platelet count had reached between 400,000 and 500,000, no more blood tests and six months away from another appointment with the paediatrician. 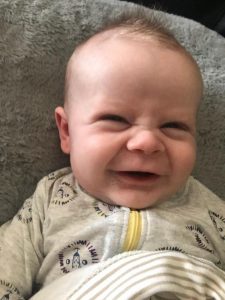 Oliver is now a happy, healthy, loving beautiful four month old little boy. We are incredibly thankful to all the doctors and nurses involved, who continue to give us information and support in making a plan for our next pregnancy with a 50% chance of it occurring again. And to www.naitbabies.org, we now have full confidence in becoming pregnant again with so many success stories with treated pregnancies. Someday I hope to have one of my own to inspire and give hope to a couple that are going through what we have just gone through.